Why Man School? by Josh Workman 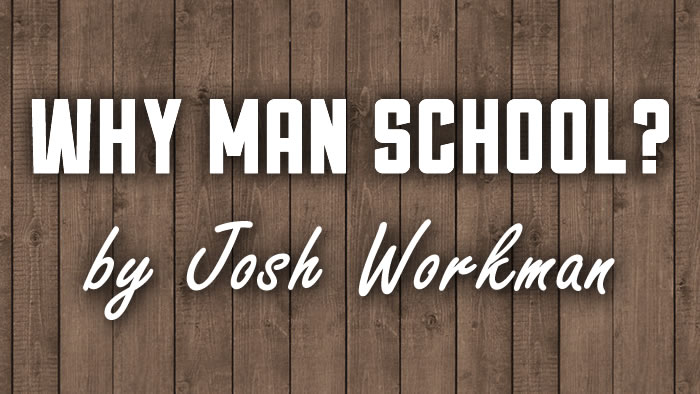 Last year, I walked into the doors of Sandals on a Wednesday evening with all the wrong intentions. I was not intending to learn any truths about God, or to meet any interesting new Christian friends, I went to see my best friend play a few songs and then I was just going to leave after that. Sundays were enough for me, I didn’t need for church to take up any more days of my week. Does this story sound familiar to anyone else? Long-story short, I stayed for the whole service that night and I ended up going to that young-adult’s ministry every single week after that, I didn’t miss it once.

Somewhere along the way I heard about this upcoming ministry coming up in the Summer called Man School. The world’s definition of “man” had become so skewed (even within our own churches) that it was time to get fired up, it was time to change, it was time to step into the lives of what God has called us to be as biblical men. I have to admit I was nervous, a bit off-put by this challenge to my masculinity, and overall just not entirely sure what I was signing up for. But, I am so grateful today that I did.

That six weeks of Man School was one of the most challenging, yet awesome experiences of all my time with Sandals. There really is no value that can be placed on quality learning time under the top-shelf men of this church. As a guy who thinks he’s right about everything, figures he pretty much has it all together, and doesn’t necessarily need or have time for more “stuff” on his plate, I would have been dead-wrong. I walked into Man School wondering if I made a mistake signing up and walked out with a challenge, a massive amount of encouragement, and shortly after became more connected than I ever thought I’d be. Man School was a huge step towards what God had next for me.

A little over a year ago, I entered into Man School with my best friend. Both of us shy, very unsure of ourselves, and neither of us really being able to see what was next for our lives in the body of Christ. Fast-forward to one year later, my best friend is now one of the main worship leaders, has transitioned into a better and more responsible job, has a wonderful girlfriend he met at Sandals, and now leads his own community group.

As for me, I have also been part of the worship team, I am part of a stellar community group full of strong leaders in our church (which I was invited to personally), I have improved my financial situation, I have been connected to an elite group of amazing men that I turn to and have the privilege of calling “mentors”, and I have been continually invited to participate and contribute more and more in multiple ministries. This time last year I could barely muster up the courage to speak to one new person.

Would I have gotten here without signing up for Man School? It’s hard to say, it’s possible I guess, but I don’t think so. If I had just passed along, I think my life would look very similar today as it did a year ago.

And so I ask you men out there, how does life look right now? Are you feeling lukewarm, or rather you just don’t see any reason you “need” to go to Man School? Are you feeling distant from God? Are you unsure of what your place is in the body of Christ? Do you feel disconnected? Or do you just want to learn more about what the bible says about being a man? Come to Man School!!

Just think, wherever you’re at right now, how much better could it be a year from now? Probably better than you think.